The world continues to watch in horror the daily images of Russia’s invasion into Ukraine, a sovereign nation with a democratically elected president. The images of Ukrainian people fleeing for safety or taking arms to defend their country are at once heart-rending and inspiring. While we are witnessing one country’s assault on another country’s independence, we are in a larger sense witnessing an assault on democracy itself.

The reaction from the United States and its allies has been swift and far-reaching. The United States, the European Union, and other nations have imposed wide-ranging sanctions that prohibit the sale of certain products and services to Russia and have placed financial restrictions on Russian banks and the international SWIFT system, making it more difficult to get paid on export transactions with Russia. A widening range of business activities with Russian entities and individuals have been declared off-limits by OFAC, the U.S. Treasury Department’s Office of Foreign Assets Control. The Russian ruble has lost much of its value since the incursion began in late February. UPS, FedEx, and several major steamship lines 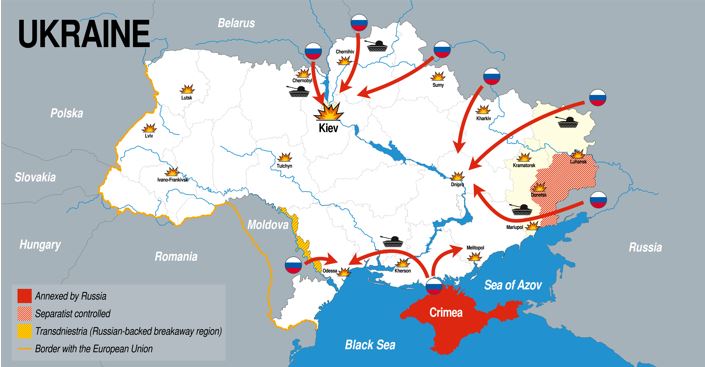 have halted shipments to Russia, most insurers are no longer insuring shipments bound for Russia, and an increasing number of Western corporations have ceased business activities there. The United States last week cut off purchases of Russian oil and natural gas, and U.S. President Joe Biden’s administration announced on Friday that the United States, along with the G7 nations and the European Union, are lobbying to strip Russia of its “most favored nation” status within the World Trade Organization, which gives Russia equal access to all WTO members’ markets and guarantees equal tariffs.

As a global exporter, Dorian Drake has felt the impact, too.

While Russia is not a major export market for us, we have enjoyed long and friendly relationships with a wide range of Russian importers. One, a foodservice equipment distributor in Moscow, is trying to find a way to pay us for orders we supplied them earlier this year. For another, an automotive products importer in Eastern Russia, we have a series of orders built and ready to ship at the factory but no clear path for doing so. Our Hardware/Lawn and Garden Group has ceased pursuit of several orders we were negotiating with Russian distributors when the invasion began. For reasons both practical and moral, we will be taking no new orders from Russia for the foreseeable future.

We have been communicating with our Russian customers, and most understand. Several have been outspoken about their objections to the war and their inability as ordinary citizens to freely express their displeasure. From the scenes of anti-war rallies that we’ve seen inside Russia, we know they are not alone. We can only hope that dissent within Russia will apply the added pressure needed for Russia to withdraw from Ukraine.

As costly and tragic as this war is, it may produce some positive outcomes. For one, it already has strengthened the United States’ commitment to NATO and to its European Union allies. Support for Ukrainians in defense of their borders and their way of life also seems to be an issue upon which all Americans, in a country badly divided, can agree. The best possible outcome, of course, would be for Ukraine to repel Russia’s invasion and establish finally its sovereignty as a free and independent nation.

After 9/11, Le Monde, France’s leading daily newspaper, famously wrote, “We are all Americans.” Today we say, “We are all Ukrainians.”