At the start of 2002, after five years of declining sales in the wake of the 1997 Asia currency crisis, Dorian Drake’s owners converted the company to open-book management, adopting a methodology popularized by Jack Stack and his ground-breaking book, “The Great Game of Business.” The owners opened the company’s financial statement to all staff and empowered each of the company’s four business units to manage their own profit and loss statement. They also established a new companywide bonus plan based on the company’s net profits. For a privately owned family business, this was a big change.

“It felt like a risky decision at the time,” says Ed Dorian Jr., “The company wasn’t doing well, and we were concerned that if people saw the financials, some might jump ship.” Some senior staff had already recently departed, lured by the attraction of internet start-ups amidst the dotcom boom.

But Dorian Jr. also knew that many staff members cared deeply about the company and wanted to help get the business back on track. “We didn’t simply open the books,” Dorian Jr. says. “We adopted a new business process that made visible previously hidden streams of income and expense and helped everyone understand how the work they do in their corner of the business affects the bottom line.”

Though market conditions remained tough, Dorian Drake’s financial results steadily improved. By the end of 2003, the company earned enough profit to produce a distribution for its shareholders and a first-time bonus payout to its staff under the new plan. “This was validation,” Dorian Jr. says, “that we were on the right track.”

In the ensuing ten years, the company doubled its sales, turned a profit every year, exceeded its stretch financial target five times, paid out more than $4.5 million in staff bonuses and produced more than $7.5 million in pre-tax corporate earnings. Open-book also helped the company weather the 2008-2009 financial crisis, when all staff members agreed to take a pay cut in order to avoid staff layoffs. The sacrifices made by all staff members enabled the company to get back into the black by the fourth quarter, when it restored everyone to full pay, and produced enough earnings by year’s end to pay everyone a year-end profit sharing bonus.

The adoption of open-book management led to other positive changes. The export management company created a cultural committee and became more focused on building a workplace where employees felt trusted, valued and engaged. Staff turnover, once as high as 30% a year, has fallen to about 5% a year since the owners opened the books. Surveys have shown that at the core of the transformation has been a new-found sense of ownership among employees.

“Dorian Drake is a very different organization today than it was before we converted to open-book,” Dorian Jr. says. “The transparency we created when we opened the books has built a spirit of openness and trust. Our bonus plan has fostered a sense of accountability to each other. We are now a team pulling together toward a common goal.” 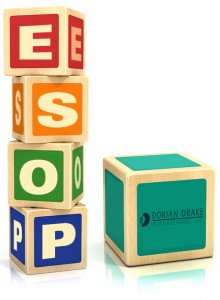 Building on this sense of ownership, the company in 2012 granted stock to a newly created Employee Stock Ownership Plan for its US employees and a parallel phantom stock plan for its foreign staff. Dorian Jr. says he had several goals in mind when creating these new employee equity plans. “First, these plans give us the opportunity to educate our staff about the things we need to do to build shareholder value. These conversations are a lot more meaningful when everyone shares in company ownership.”

A second goal, he says, was to create a staff retention vehicle. “We work hard to recruit, develop and retain the best people in our field. We believe employee ownership gives people another reason to stay and build their careers with Dorian Drake.”

Dorian Jr. says the employee stock ownership plans could also provide him with an eventual exit strategy. “If I come to a point where I think I need to sell the business, the ESOP and phantom stock plans would provide the option to sell the business to the people that helped us build it.”

Knut Sauer, veteran manager of Dorian Drake’s Automotive Group, notes, “Open-book management grew employee awareness about the bigger picture and educated everyone as to how they could contribute to corporate profitability. Taking this next step of implementing an ESOP further motivates the employees to drive not only profitability but also the long-term value of the organization. It’s very exciting to see the ongoing transformation in people from line staff to financially aware employees to owners.”

Interested in learning more about a company that believes in building value and long-term relationships?