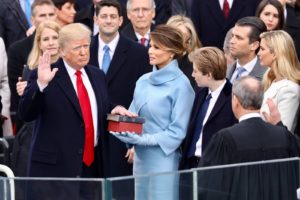 In November 2016, just after the last U.S. presidential election, I was speaking with one of our clients, a manufacturer in the foodservice equipment industry. He was almost giddy with optimism about the election’s outcome.

“We’re getting killed by low-priced products from China,” he said. “(President Donald) Trump has promised to impose tariffs on low-priced Chinese imports. This just might be our last chance for survival.”

Roll the clock forward to early last month, when I called the same client to discuss an issue with one of our mutual customers. “I can’t help you right now,” he said,  “I’m too busy trying to source steel.”

“All of our suppliers are hoarding steel, waiting for the new (25% U.S. steel) import tariff to kick in,” he answered. “Once the tariff takes effect, they’re expecting prices to rise, perhaps as much as 25%. No one wants to sell to us. They’d rather sit on their stock and wait, rather than sell it now. If prices rise, as they expect, we’ll have to have to pass along the increases to the market, creating an even bigger gap between our prices and the Chinese. I don’t think the folks in Washington understand the impact these tariffs will have on U.S. manufacturers.”

The manufacturer hasn’t implemented a price increase yet, but if he does, it will have the same impact on our exports of his product line, widening the gap between our prices and lower-cost international competitors.

This comes at a time when the outlook for U.S. exports is brighter than it has been in several years.

One big reason for the brighter outlook is resurging crude oil prices. The price of crude, which according to a Nasdaq Crude Oil Index,  bottomed out at $29 a barrel in early 2016, has steadily rebounded, hovering most of this year between $60 and $65 a barrel and closing on April 27 at $68.10 a barrel, a 234% increase in just over two years. This has provided a shot in the arm to oil exporting countries in Latin America, including Mexico, Colombia, and Ecuador; Russia and Central Asia; the oil-rich economies of the Middle East; Nigeria and other big oil-producing African nations; and oil exporting countries in East Asia, including Indonesia and Malaysia—all traditionally good export markets for U.S. products. 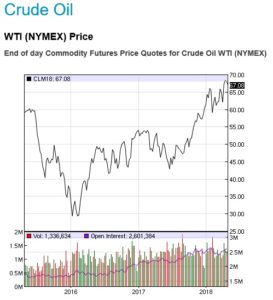 Another big reason is the resurging prices of widely traded minerals that are economic drivers in a number of other key U.S. export markets, including Peru, Chile, Brazil, South Africa, India, and Australia.  A report published by Index Mundi shows the composite price of commodity metals, including copper, aluminum, iron ore, tin, nickel, zinc, lead and uranium, increased 60% between January, 2016 and early this year, following several years of steep declines.

The positive global picture was captured in a front-page article on January 26 in the New York Times, which reported that “a decade after the world descended into a devastating economic crisis…every major economy on earth is expanding at once, a synchronous wave of growth that is creating jobs, lifting fortunes and tempering fears of popular discontent.”

Enhancing the positive outlook for exports has been the decline in the value of the U.S. dollar, which makes U.S. exports priced in dollars that much more affordable to foreign buyers. A chart produced by the Federal Reserve Bank of St. Louis comparing the weighted average of foreign exchange value of the U.S. dollar against a subset of other major internationally traded currencies shows the dollar’s value has declined almost 13% since early 2017. 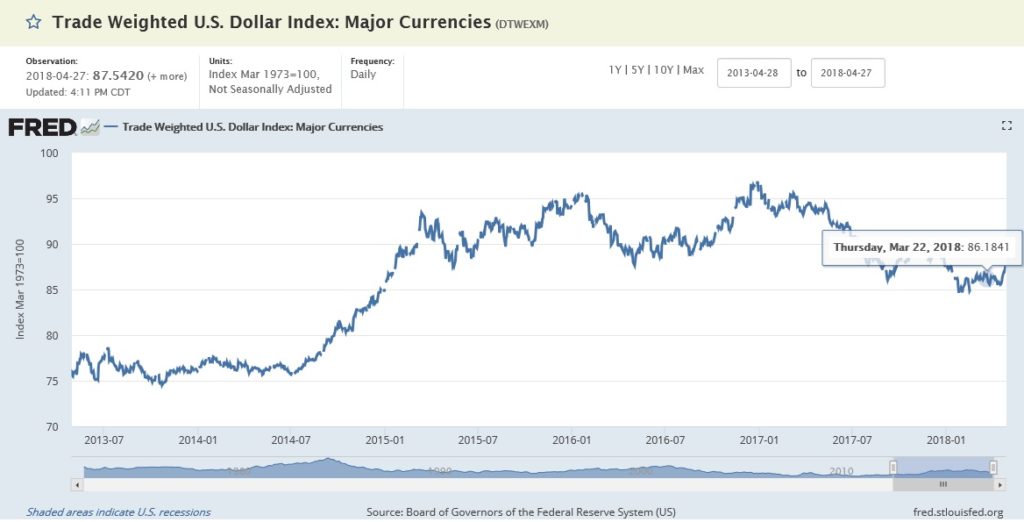 When we addressed the Dorian Drake global team during our annual business conference in January, we presented our most ambitious growth plan in years and supported it with some of the same statistics shared here. But we also cautioned that President Trump’s protectionist impulses could darken an otherwise bright picture.

In recent weeks, we’ve heard from several of our other manufacturer clients across different industries that, due to the steel tariff and the companion 10% tariff imposed on aluminum, we should expect price increases soon. Some of our clients have already passed these increases along to the market. As far as we can see, this is the lone ominous cloud on an otherwise sunny export horizon.  Needless to say, the stakes are high for all of us in how this all plays out.

One thought on “An Ominous Cloud on a Bright Export Horizon”